These 90-Year-Old Runners Have Some Advice for You

The scene at the Ansin Sports Complex in Miramar, Fla., was recognizable, not unlike any high school track and field meet.

There was a practice area where athletes jogged and stretched. There were anxious runners milling about the track and tarps providing shade from the hot Florida sun.

But the athletes competing at the National Senior Games track and field event had a few more gray hairs than their teenage counterparts. They also had grandchildren cheering for them in the stands.

Many of the runners were between 75 and 99 years old and had not picked up running until they were in their 60s. Some needed a bit of assistance getting their shoes on before making their way to the starting line. But all shared a determination to compete — and to complete each race.

They had plenty of advice for younger runners who hoped to follow in their footsteps around a 400-meter oval.

Stay consistent, stay persistent and stay in motion, they said. 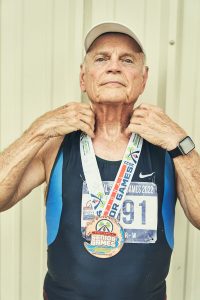 “I try to be an inspiration,” Walter Lancaster said. “A lot of people, you know, get lazy or something. And I say: ‘Look. You got to keep moving.’ That’s the secret. Just keep moving.”

As a passionate competitor, the 82-year-old Lancaster taught himself how to compete in field events — both throwing and jumping — to complement his track races. “If you hate running, you’ll find a lot of reasons not to run,” he said.

Lancaster doesn’t anticipate slowing down any time soon. “I just enjoy it,” he added. “I’ll keep going as long as my joints hold up.” 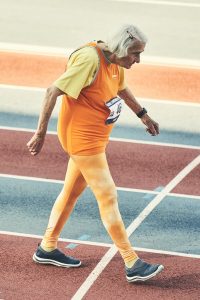 Lillian Atchley said she didn’t have much advice for new runners. “I guess you just have to have the love to race, the determination to just do it,” she said.

“The people in the run community are wonderful,” she said. 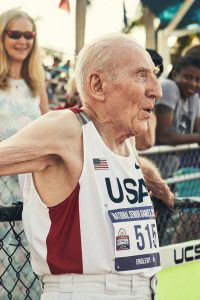 At 99-years-old, Roy Englert was one of the oldest participants in the National Senior Games. He competed in the 400-meters, finishing in 3:35:47. 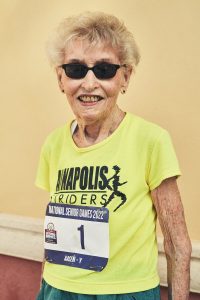 Many have called Yvonne Aasen an inspiration. But running is “just what I do,” she said. “I feel good when I run, and when I don’t run it feels like I’m missing something.”

As a member of two running clubs — the Annapolis Striders and the Westminster Road Runners Club — she embraces the opportunity to compete. Like her friendly rival, the 93-year-old Atchley, Aasen entered the 50-meter dash, the 100, 400, 800 and 1,500. In some races, she was one of only two runners. But she didn’t mind. “I feel competitive even when I don’t have competition,” she said.

And for runners looking to keep pace? “Run every day, even if it’s a short distance,” she said. “I can’t run very much now, but when I can’t run any more I’ll still walk.”

Article first appeared on New York Times on 21 May 2022