The ‘Mighty Mo’ begins her second century as a swimming champion

The chorus of “Happy birthday!” rang out across the surface of the swimming pool, booming forth from dozens of swimmers, who bobbed between the lane lines, each outfitted with a pink latex cap, emblazoned with white roses and a “100.”

Superlatives have been washing over Kornfeld, one of America’s most decorated masters swimmers, for years. A many-time national champion and holder of 20 age-group world records, the “Mighty Mo” turned 100 on Saturday, celebrating in the pool and trying repeatedly, with limited success, to turn the attention to her comrades in chlorine.

Fellow swimmers marvel at the aquatic prowess of a woman who didn’t begin serious swimming until she turned 60. But they’re even more smitten by Mo, the teammate and friend, who acknowledges their lives, hopes and cares. 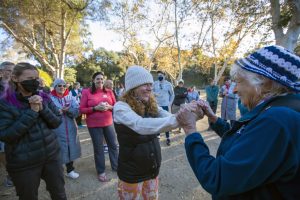 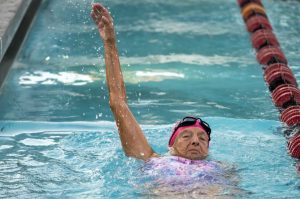 “She’s just amazing. She’s always looking out for other people and what matters to them,” said Susan Gold, a public relations consultant. “She’s really thriving, really living. It feels like she is aging backwards. It’s a kind of elfin magic.”

Kornfeld swims regularly at pools in Glendale and Sherman Oaks, along with the Pasadena masters team, which she competes for in meets around the world. Swimmers at each of those pools claim her as their own.

“It’s like you’ve become pool-ygamous,” said Nancy Niebrugge, a Rose Bowl swimmer and friend. Sitting in the hot tub after Saturday’s 6:30 am workout, Kornfeld threw her head back and laughed.

The sunup start time strikes people half her age as absurd. But Kornfeld feels there is no better way to start the day. “It gets the cobwebs out of the brain,” she says. She loves the feel of the pool. “You know, water is a very sensuous matter,” she says. She loves backstroking, in particular, looking up at the sky and the birds. She especially loves her fellow amphibians. “We all tend to gravitate to one and another,” she says, “maybe because we know the same struggles.” 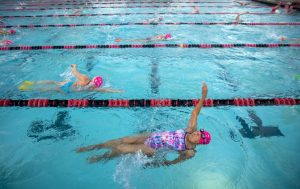 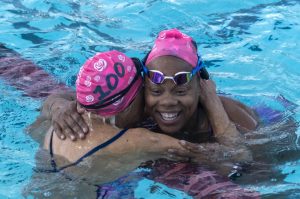 Kornfeld’s journey began in Great Falls, Mont., during the administration of President Warren G. Harding. Her father owned a menswear shop and her mom raised two Kornfeld boys and their sprightly sister.

Kids in the last Roaring 20s and Great Depression had more freedom. For young Mo, that meant frequent trips to the library, where she fed an early love of learning, and around the streets of her hometown. On nonschool days, children roamed from morning until sundown. Free from their parents’ meddling eyes, they made their own adventures.

Unusual for women in her day, Kornfeld went away to college. At the University of Chicago, she found no end to the intellectual stimulation.

“It was rubbing minds with some of the best and brightest,” Kornfeld said, a few years back, of the university she would support for decades to follow. “I mean, what wouldn’t be exciting?”

After getting bachelor’s and master’s degrees in social work, she moved to Los Angeles, where she launched a long career as a social worker — serving the L.A. Unified School District and Cedars-Sinai Medical Center, among others. 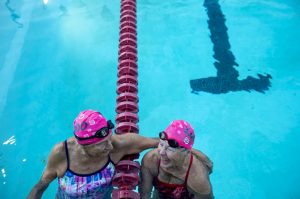 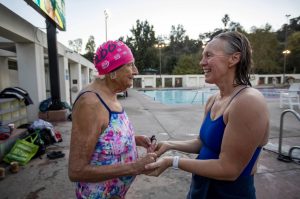 “She didn’t want a big fuss. She didn’t want any presents. Absolutely no presents,” said Cheryl Simmons, a teammate and friend who will soon take over as coach of the Rose Bowl Masters team. “She also didn’t want to take any attention away from Chad.”

Chad Durieux, a 42-year-old Canadian who has coached the Rose Bowl team for 16 years, is moving to Japan with his wife and two kids, a significant change for the coach and the team of 250 swimmers.

“He will tell you to lift your arm higher or kick harder,” said Kornfeld. “But his greatest strength has been to take this amalgamation of strange, rugged individuals and to form them into not just a team but like a large, extended family.”

Passing 95 a few years back, the counterintuitive charms of “aging up” began to pay real dividends in races. Plainly speaking: Kornfeld has outlived most of the competition. She is one of the oldest registered masters swimmers in America. 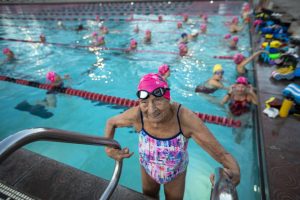 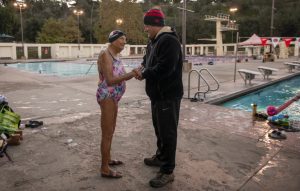 The rules of the sport (for races measured in meters) mean that Kornfeld qualified to swim in the 100-to-104 age bracket as of Jan. 1. Swimming in freestyle and backstroke events this summer, she bagged six more world records.

Kornfeld reacts to the achievements and the attendant acclaim with aplomb.

“There’s no boasting. She is just like, ‘I got my best time and I got a record. That’s nice,’ “ said Durieux. “It’s a totally different perspective than a lot of the younger kids.”

If she has learned anything in 10 decades, it’s to not be too cocksure of anything. She doesn’t proselytize, including on questions of longevity.

“I can’t say it’s anything particular about me,” Kornfeld told Times photographer Francine Orr, who was inspired by Kornfeld to resume her swimming life. “I can’t say it’s because I ate Wheaties, or didn’t eat Wheaties or that sort of thing, except that I have been very fortunate.”

Simmons visited Kornfeld recently at the cozy Hollywood bungalow where she has lived for decades. She was certain about all the gifts she didn’t want or need.

The centurion-in-waiting gestured at the abundance of keepsakes and thriving plants around her.

“Look around you,” she told her friend. “I have everything I need.”