The official presentation of the 2024 IMGA Winter World Master Games Lombardia, the most important international winter sports event reserved for athletes ‘Over 30’, scheduled to take place from 12 to 21 January 2024, was held last week.

The Winter World Master Games have been strongly championed by the Ministry of Tourism and Regione Lombardia, which immediately recognised the strong potential of this event promoted by the IMGA (International Master Games Association), of which Sergey Bubka, the Olympic champion who attended the presentation, is chairman. He gave a short speech in which he shared his enthusiasm for the many sporting opportunities offered by Lombardy and confirmed that the Winter World Master Games are important for relaunching mountain tourism through sport, as well as offering a preview of the Milano-Cortina 2026 Olympic Winter Games. 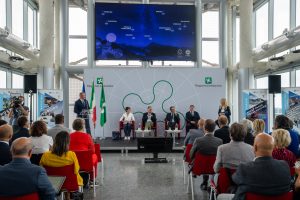 Antonio Rossi, Undersecretary for Sport, the Olympics and Major Events said: “The Winter World Master Games are going to be an important opportunity for us because we are expecting at least 3,500 athletes and their families. I would like to thank President Fontana because he believes in sporting events and the ideals of sport, and also all the mayors who are going to be hosting the competitions for coming together and setting up the Foundation, and for working together to ensure the success of this project.

Attilio Fontana, President of the Lombardy Region, spoke afterwards: “The Winter World Master Games are a special event: the sporting aspect is undoubtedly extremely important, but they are also a huge celebration attended by families. Not only that: they are also a way of sharing the territory. We believe in tourism, we believe in sport, and we believe in combining the two. 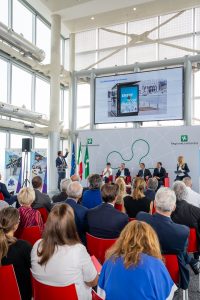 Before the closing remarks, Italian Minister for Tourism, Massimo Garavaglia, said a few words: “This is a great opportunity for the mountains, which need events like this to grow and to emphasise the importance of winter sports. We need to develop this very powerful combination of sport and tourism, which also affects the Italian economy. Special thanks go to President Fontana for believing in this project and also to the mayors, whom we met at the ministry and who immediately understood the importance of teamwork to accomplish this outstanding initiative. The Winter World Master Games accompany the Milano-Cortina 2026 Olympic Winter Games, but also the 2028 Youth Olympics… because we never stop!” he said.

Nine municipalities, seven from Lombardy and two from Trentino, have been involved in the fourth edition of this multi-sports event: Madesimo, Chiavenna, Chiesa in Valmalenco, Sondrio (where the opening ceremony will be held), Aprica, Bormio, Pontedilegno-Tonale, Vermiglio and Pellizzano. An important example of territorial collaboration between different mountain localities for the realisation of an event that focuses on the values of sustainability and excellence.

Nine representatives, one for each municipality, have set up a Foundation, which will take care of every aspect related to the organisation and promotion of the event and the territories involved. These representatives met last summer to formally and ideally unite and share the union of intentions, the definition of a timetable and the desire to seize all the opportunities that an event of this magnitude will bring, and to amplify its impact on the territory.

Ministerial advisor Manuela Di Centa, who was appointed honorary chairperson of the Foundation, said today: “The day Minister Garavaglia called me to propose me to collaborate on this initiative, he immediately told me that we would have to combine tourism with my world – sport – and that was the start of a splendid journey of strategy and vision. This is a huge responsibility for me, but it’s also extremely rewarding”. 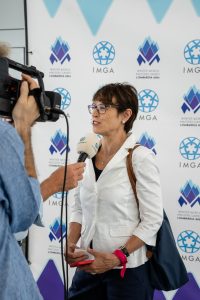 The Foundation assigned the creation of the logo to the IED – Istituto Europeo di Design. Two multi-disciplinary teams of IED students contributed to the development of the creative idea. The logo designed aims to highlight both the passion for sport and the link with the area where the games will be held: the concept shows how the athletes, the protagonists of the games, are driven by their passion, identified by the flame of the torch, and, at the same time, feel a strong sense of belonging to the locations where the Winter World Master Games will be held. This is the basis on which the logo, a stylised torch and a restyled flame, was designed, to evoke the shape of the Alpine valleys superimposed on each other. 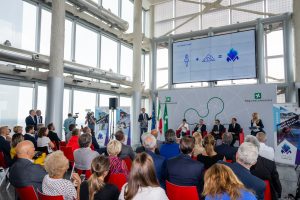 The Winter World Master Games Lombardia 2024 are expected to be attended by over 3,500 athletes aged 30 to 90 from all over the world, accompanied by technical staff, coaches and supporters, who will be engaged in challenges in various snow and ice sports. 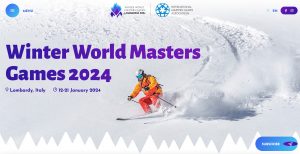 In a little bit over one year’s time the Lombardia region will play host to the greatest international winter multi-sports event, that will have a clear impact in terms of tourism: participants will have the opportunity to discover the local traditions of the nine municipalities, while also appreciating their natural beauty, culture, history and typical food and wine. The program around the competitions and events promises real spectacle and plenty of action in an amazing vibrant atmosphere.