‘Legend’ is a word so often overused in sport, but in the case of eight-time Olympian Jaqueline Mourao it is entirely accurate and appropriate.

While other Brazilians have won more medals, none have appeared at as many Olympics, or competed in as many different sports – three – across Summer and Winter Games.

She was her nation’s first female Olympic mountain-biker and biathlete, while the 46-year-old has also competed in five Games as a cross-country skier, most recently at Beijing 2022.

“Resilience is the symbol of my career,” Mourao tells the Women’s Sports Alliance (WSA). “Inspiring people to believe is the most important thing to me.

“I’ve been an athlete since I was 15 and to go to one Olympics was the dream so to think I’ve been to eight makes me so emotional as every single time has been so special.

“I’m a normal person, who was born and grew up in Brazil, that had a dream and it’s nice to prove to other Brazilians it’s possible to be an athlete in winter sports.”

Mourao made her Olympic debut as a mountain biker at Athens 2004 and two-years later she joined a small but illustrious list of athletes to compete at both a summer and winter Games by taking part in cross-country skiing at Turin 2006.

Her move into a second sport – and winter disciplines – came completely by chance.

“There was no plan and it was just an accident,” she recalls.

“I was mountain biking and I arrived in Canada for training and everything was white in the month of May! We couldn’t cycle, I got to do cross-country skiing and it started from there.

“What I love is the contact with nature, the silence, the peaceful moments and doing sport in such beautiful places with the gorgeous snow.”

Training for a winter sport in a tropical nation like Brazil creates obvious challenges, but athletes in warmer climates adapt and replicate skiing actions by training and competing on roller skis.

Mourao added biathlon to her list of Olympic sports for Sochi 2014 in Russia. She opted against pursuing it again at future Games and perhaps unsurprisingly ranks it as the toughest of the disciplines she has competed in.

“Biathlon was the most challenging sport for me because I had the physical intensities and also I had to learn about calming down my body and being focused to do the shooting,” she states.

“It was the most difficult one to qualify in and while of course every single sport has his own characteristics, biathlon was the toughest one.”

This year’s Winter Olympics were her eighth Games she became one of only two athletes to compete in both Beijing 2008 summer and Beijing 2022 Winter Olympics. The other, for reference, being Britain’s sprinter turned bobsleigh brake-woman Montell Douglas.

Mourao attributes her longevity to not only her persistence and determination, but also mindfulness and the discovery of a new hobby during Coronavirus lockdown.

“With quarantine we had to be inside I was training on rollers but also reading and spending lots of time on my computer and I said ‘no, I need to do something else,” she recalls.

“I have a kids and they suggested the Rubik’s cube and I discovered I really liked the challenge. It felt like an athlete’s career with the puzzle and all these movements you have to consider, but I also found it relaxing because I didn’t think of anything else while I was doing it, so it became a passion.” 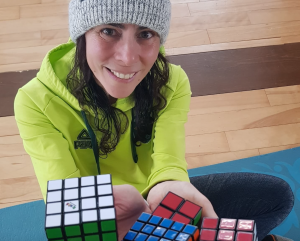 The Brazilian, who won Pan American Games Cross-Country bronze in 2019, is unsure whether she will bid for Paris 2024.

She is though hoping to compete at one further Winter Olympics, with the 2026 Milano-Cortina Games taking place in the same country – Italy – as her first in 2006.

“It’s such a fascinating sport and because I learned so late in my life I’m still improving,” she tells the Women’s Sports Alliance.

“This January I just got my best result in Cross-Country classic, so I have some inspiration for women that are older and still getting better results and of course I still want to improve.

“I’ll go step-by-step, but it would be nice to finish my career in Cortina, yes!”

Article first appeared on Women’s Sports Alliance on 20 May 2022, written by Nick Hope