Brisbane’s Julie Brims has broken sprinting world records but the mother of two says clearing ageism hurdles has been the biggest challenge.

And just last week Brims smashed the world record she had set the previous month in the 100-metre sprint at the ACT State Open Championships in Canberra.
Brims started running at 36, when her daughters started competing in athletics.

“I started joining in just doing the odd 100 metres while they were competing on the night,” the former basketball player said.

“Then I just grew more and more towards sprinting where it was just so much fun doing an individual event where you didn’t have to rely on another person refereeing with you or anything that goes on the basketball court.

“It was just all you and I really enjoyed that part of it.”

Brims was soon entered in a track classic meet, and she won.

“I went there and I won that race and it just felt so good to be able to win such a race at that standard,” she said.

But finding a coach did not come as easily.

“A lot of coaches would see me run from a distance and then when they would approach me they’d say ‘I’d really like to coach you’ and I’d think that was tremendous and I was so excited,” Brims said.

“Then after a while they would say ‘excuse me, but how old are you anyway?’ because they never knew my age.

“I would tell them and they’d say, ‘you’re too old, I’m not going anywhere with you with this. Maybe you’d be better off going back to what you do on your own’.”

“A lot of the time I’d be really disappointed because I was really keen to improve because I knew that if I could get coached properly, I could be better.”

Ageism and discrimination in sports

Dr Rebecca Olive from University of Queensland’s School of Human Movement and Nutrition Sciences said Brim’s experience was not surprising.

“Discrimination against women in sport is an absolute fact,” Dr Olive said.

“Discrimination against people who are aging in sport, is an absolute fact.

“Another thing that happens with women: there is an assumption that after childbirth or after menopause women’s bodies are less sort of virile or they’re damaged somehow.

“What I think is is interesting is how [Julie] was dismissed despite them seeing her do well.

“They saw her running really fast and it was when they saw her age [they lost interest].

“That is ageism and definitely discrimination, right there.” 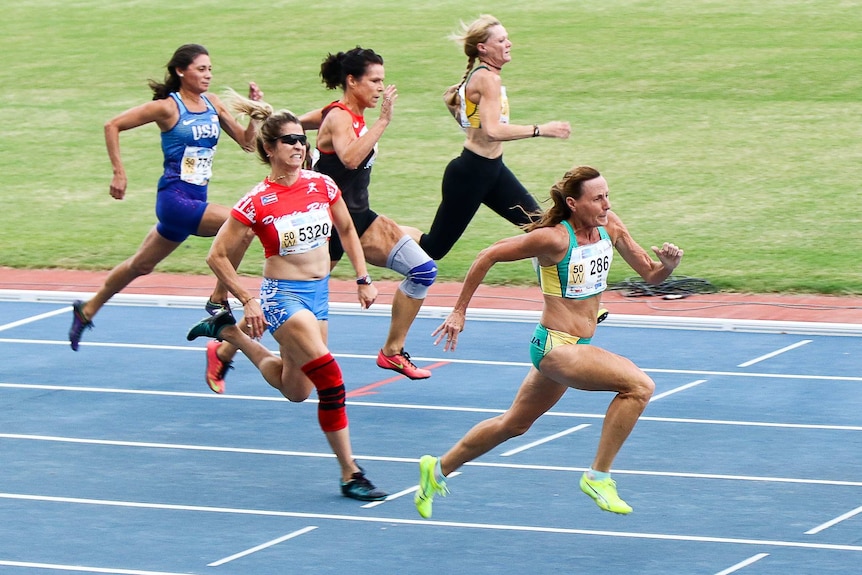 Julie Brims out in front during a sprint at the World Masters Athletic Championships in Malaga, Spain in 2018

Dr Olive said elite sport took a very rational, formulaic approach when it came to decision making and she gave the example of how people with different body types were singled out for certain sports, while others were ruled out.

“This is very common from when we’re children, let alone as we get older.”

“Now in men’s tennis you can see the kinds of bodies that are playing tennis, they’re so tall , they’re all over six foot.
Dr Olive said often in elite competitive sport, success was measured by winning.

“There are a lot of assumptions about the kinds of investment that people want to make with time and money into a person when it comes to the kinds of results that they might get.”

Undeterred by discrimination or health complications. Instead of letting her disappointment in a coach’s decisions deter her, Brims used it as fuel.

“Most of the time I would go off and I would train as hard as I could to say look, ‘if you’d have had me I would have run these times for you’,” Brims said.

The next challenge Brims faced was a blow to her health.

“I developed trigeminal neuralgia which is an artery in a vein wrapped around the fifth cranial nerve in your brain and that extends to the nerves in your brain,” Brims said.

“That extends to the trigeminal nerves that run in your face, across the top of your mouth and jaw and under your eye.

“I got that quite badly, to the point where the medication to stop the pain was actually causing me not to be able to move around.

“I couldn’t drive, I was pretty much a zombie just trying to control the pain.”

In early 2015 Brims had surgery to correct it. 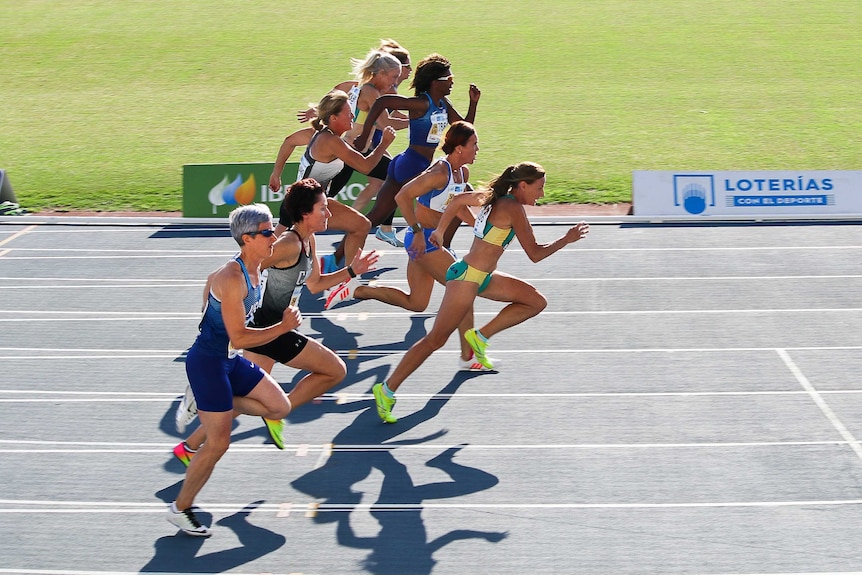 Despite major surgeries and discrimination, Brims continues to train and compete.

“I did have a few scary moments where I ended up being on life support for a few hours and some other things.”
The surgery went well but Brims had complications which resulted in a further three procedures.

“I kept thinking, ‘when I get out of here, I’m going to go back and run and I’m going to get back to where I was and run just as well’.”
But even when she did return — this time with a coach — ageism reared its head again.

“After my first run back from the illness [my coach] said to me, ‘you must be happy with that time.’ Me being me, I was like ‘oh no, it wasn’t that good’,” Brims said.

“She ended up telling me that that was my new PB and that I would never ever run fast again because of my age and I’m only going to get slower.

“All statistics say you only get slower as you age and for me, if you accept that opinion, yes you won’t run faster and you will just sit back and accept what’s been said.

“I didn’t accept being told that so I went out and I trained as hard as I could.

“I believe in myself and I know what I want.”
Brims again found herself at the Masters Outdoor World Athletic titles in Perth in 2016.

Dr Olive said for a long time, people thought younger athletes were better at sport but a number of well-known sports men and women have achieved greats feats in mid-life.

“Roger Federer is another one. I think he’s [39] and he’s still a force to be reckoned with.
US surfer Kelly Slater, at 49, is the youngest and oldest World Champion in men’s history.
Slovenian free driver Alenka Artnik set a record last year at 39 as the deepest female free-diver, diving 114 metres in the Red Sea. 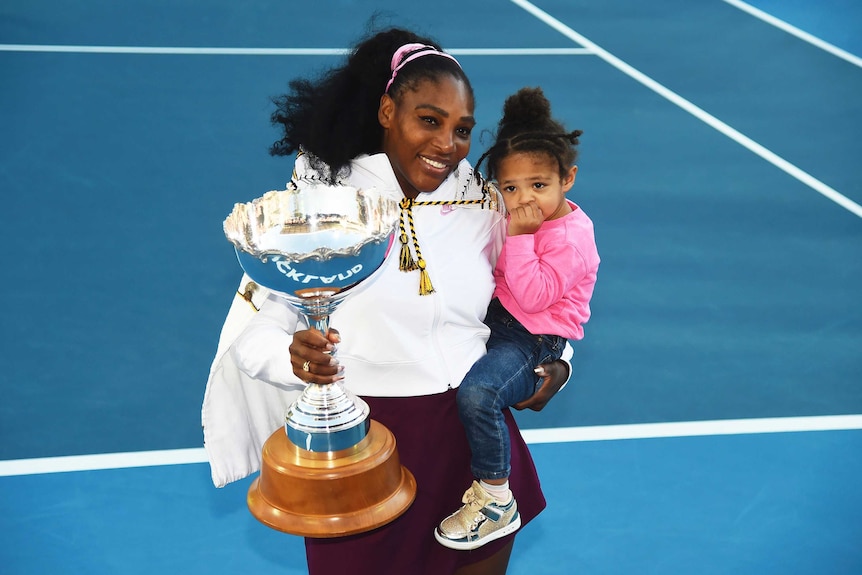 Serena Williams with daughter Alexis Olympia Ohanian Jr. after winning her singles finals match against Jessica Pegula at the Auckland Open in 2020

“Because we’re seeing people continue to participate in sport as they age, I think there might start to be some shift in attitudes,” Dr Olive said.

“It makes such a difference to other women who might think about taking up a sport later in life.”
Brims has since been taken on by a coach, who was not worried when Brims told him her age.

“I’m just grateful every day that I get the opportunity to train with him and with the other athletes.
For others, particularly women, Brims has this message.

“I don’t think age should ever be a limit to what you can and can’t do.

Find out more about Athletics at our Masters Games