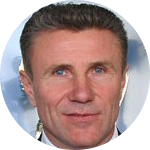 Graduated from the Kiev State Institute of Physical Culture (Ukraine) (1987); Doctor of pedagogy