The town Kobe, where a foreign settlement was developed after opening Kobe Port in 1868, immediately adopted various things including sports, and the modern Western culture spread across the town. Many things were adopted in Kobe for the first time in Japan; Golf, Marathon, Rugby, Jazz band, movie, canned coffee, etc.

The Table tennis bar “BIG WAVE” is about 5-minute walk from JR Line’s “Motomachi” station. It’s on the 6th floor of a building standing on Tor Road. As I opened the door, the owner Mr. Ikeda welcomed me with a smile on his face. Since he was in a Table tennis uniform, I nearly forgot that his main occupation was what we call a solid type of job. 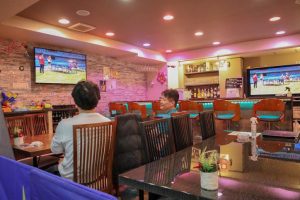 As I entered inside, I saw people in a Table tennis uniform with their back against the bar counter, hitting the balls with their full strength towards the direction where we were. (What!? Don’t they just play drinking alcohol!?)

The sight of people practicing Table tennis with bottles of alcohol and glasses behind them nearly knocked me down. But it looks very interesting. This is not what I was expecting but I can feel that it’s gonna be fun…!

The person who was coaching others is Mr. Li Longfei. He was once a member of China’s National Jr team and he used to coach athletes including Ms. Kasumi ISHIKAWA and Ms. Mima ITO, what a great person (And good looking!).

Actually, Mr. Ikeda owns teams and a mixed doubles team won national team Table tennis championships. The team is so strong that they are even thinking of joining the pro league (T League). 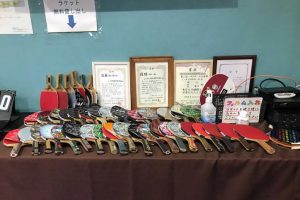 Those team members and Mr. Ikeda’s strong Table tennis mates gather at this shop. Even a customer who popped in and just drinking at the bar is a national level player, that often happens, apparently. For example, a French business man visited the shop with his Japanese colleague the other day, and he was no. 8 in French rankings!

“If I see him again, I’ll invite him to the games in Kobe.”, Mr. Ikeda said happily. Running this shop brought him encounters like this. Well, if you went to a competition that you are used to and your opponent was the no. 8 in French rankings, I can’t say whether you were lucky or unlucky, but I bet you’ll Google his name afterwards, won’t you?

There was a man sitting in the box seat in the back, drinking on his own. (He was in a Table tennis uniform, too).
His name is Mr. Kawamura, and he was in the top ranking when he played at prefectural tournaments as a student, apparently. He stopped playing after he graduated, but recently he got to know this place when he was attending a cross-industry social event, so he came today to try Mr. Li’s lesson.

“I was quite strong when I was a student, but here, people hit back my hardest shot easily.” 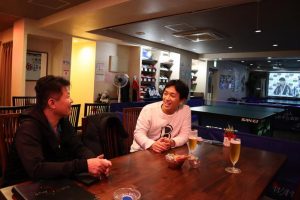 Well, maybe it’s natural. Because this is a bar but there’re people who can give lessons to national level players.

It was impressive that he looked so excited and happy while he was talking about Table tennis. And he kept offering strong alcohol to Mr. Hamai (The manager of “Table tennis shop TAKAHASHI” who came with me for this coverage) from behind, as he will be playing against Mr. Hamai later, ha ha. Everyone is having fun and there is a happy atmosphere in the shop. I guess he’ll start playing regularly again from now on.

Looking at Mr. Ikeda and Mr. Hamai chatting, I kept thinking “How happy they look, talking about Table tennis forever.”.

They were talking things like this. A customer who challenges Mr. Ikeda and loses all the time bought a new racket at Mr. Hamai’s shop, and came back to the bar saying “I’m doing good recently!”, but he already had a few drinks on the way so he lost anyway. Another story was that Mr. Ikeda took the no. 2 in Japanese rankings to a Table tennis bar in Osaka to play. And then a man beaten by the no.2 bought them drinks saying “Who are you guys!?”, ha ha.

“It’s curious that Table tennis players can keep talking about Table tennis for hours. In a region like Kansai, Table tennis community is smaller than you’d imagine and there are many mutual friends.”, Mr. Ikeda laughs.

If you wow on hearing the name Mr. Kaneyama, the legend who inspired Mr. Ikeda to play Table tennis for the first time in 25 years, I bet you’ll have a great time here talking about old days.

And if you are confident with your Table tennis skill, you may enjoy playing exciting matches. If you are coming during the World Masters Games, you may be playing with international athletes.

The Table tennis tables and rackets you can borrow at the shop have been chosen carefully by Mr. Ikeda. Since I had only used the “racket shaped ones made of plywood” before, I admired the 30,000 yen racket there, which is so comfortable to use.

12 years ago in a Ramen noodle shop, Mr. Ikeda happened to meet the legend he used to admire and started playing Table tennis again. Then, he started keep in touch with his Table tennis mates again. And opening this shop 3 years ago broadened his world, he even made teams with athletes from China and Korea, whom he couldn’t have met if he was doing only his main job.

I always think this way, “By meeting people, a new path of life opens up and you will be guided.” In addition to that, I thought there is an equation here, “Sport you like × Fun place × Friends × Drinks = Great life”. Mr. Ikeda laughed calling his Table tennis bar a “hobby”, but he managed to do this because an adult did it seriously, and this is a serious hobby. That’s how this place became the meeting place for adults. 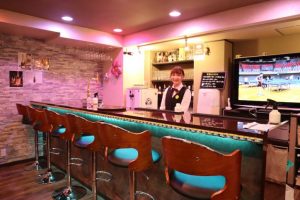 On the big screens in the shop, games of his teams or world championships were displayed. Mr. Hamai and Mr. Ikeda kept talking about Table tennis forever watching those videos. We had a fun playing Table tennis, which I got very competitive. It was already past 11pm by the time we left the shop.

“The 100-year life”. I think a place like this plays a significant role to enjoy the latter half of your life. A reader of this website like you may already got involved in the WMG, so you already know a place like this.

Tonight at “Table tennis bar, BIG WAVE”, a gift of “serious hobby”, someone may be thinking, “What a nice place! I might take up Table tennis again”.