Irish international hockey stalwart Billy Pollock began playing hockey aged 15. At 65, he’s in the midst of his 50th season on the pitch.

For 18 of these years, Billy has travelled the world playing for Ireland across various Masters age groups.

His Masters journey began with the first Over 40s Masters 4 Nations Tournament in Cardiff in 2001. Since then, Masters hockey has taken Billy around Europe and as far afield as Australia, Malaysia and Korea.

He said “I’ve seen more of the world through playing Masters hockey. All those places I’ve seen I would’ve never got to. Those places have been such an experience. I’ve been able to bring my family out to places like Seoul and they were knocking the ball about with ex-international hockey players. It was a great experience for them. The exposure, the people, the Masters community… It’s great.”

With these experiences come the longstanding friendships – a special camaraderie for which Billy accredits Masters sport and the Masters community. A well-known figure in the Irish hockey community, the friendships that have matured throughout Billy’s Masters hockey career span the globe. He has many good friends from all over the world that he regularly keeps in contact with and meets whenever their paths cross.

“It’s been such an experience and there are so many memories. I have some great friends. The community is fantastic; we share the same values and love of the sport. Play hard, but have camaraderie, enjoy a beer together and fun off the pitch!”

For Billy, it’s these experiences that make Masters sport unique. 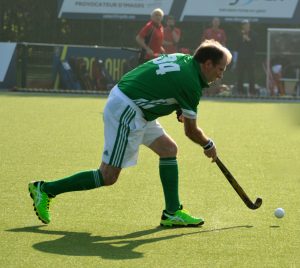 However, to enjoy these just rewards, there is a serious amount of hard work, dedication and preparation required when playing at international level.

Following a rigorous training schedule that includes a comprehensive strength and conditioning programme and travel to and from Belfast and Dublin, Billy admits competing at this level can be intense. He believes he’s trained harder in the last 12 years than he ever has before.

With strenuous competition schedules meaning teams may compete in as many as 7 matches over 9 or 10 days, Billy reiterated the importance of training regularly and looking after yourself physically.

He said, “We’ve had guys that have played in the Olympics and tried to play Masters hockey, but they didn’t survive the weekend. These guys were really good players, but they aren’t playing regularly, and you need to be. It just shows you that the standard of hockey is good. It’s all about the fitness and still playing.”

It’s this attitude to training (and the help of “dozens of physios”) that has allowed Billy to continue his successful playing career. While his competition may initially doubt his ability, he has confidence that his teammates “know they can still pass the ball to me and I can still score a goal.” 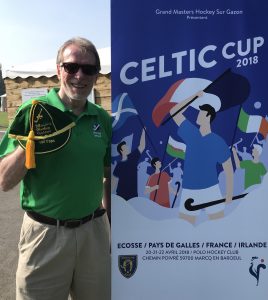 To those considering taking up Masters sport, this Irish Hockey Stalwart’s advice would be to enthusiastically “go for it!”

“I love playing Masters, it’s an honour playing for your country and it keeps you aiming for another goal. If I had to stop playing now, I’ve had a whole journey that I’ve loved. The thing is my best mate has been with me on most of those trips. There are so just many memories!”

The IMGA offers an amazing opportunity to enjoy exciting competition whilst exploring stunning location and connecting with a fantastic community of like-minded athletes.

If you’re keen to get moving and discover your potential… join the Masters community today!