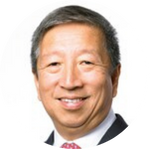 Bachelor with honours in Business Administration, University of Singapore