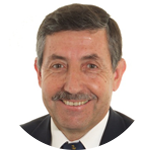 José Perurena competed at the 1968 Olympics as a canoeist in the K4 event. He was a Spanish national champion several times in kayak and competed internationally for many years. A computer technician, he later became director of the IT Departent at Saint-Gobain in Spain.