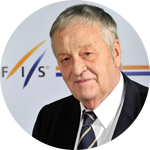 Psychology, Philosophy and Journalism at the University of Zürich.

Organiser of World Skiing and Bobsleigh Championships, European Championships in Yachting and Riding; manager of the Swiss National Tourist Office in Montreal (Canada); Secretary General (1975-1998) then President (1998-) of the International Ski Federation (FIS); Secretary General (1975-1998) then President (2000-2002) of the Association of International Olympic Winter Sports Federations (AIOWF); GAISF Council Member (1986-); Manager of an international non-profit foundation since 1998 in the field of education, environment, sport promotion and social assistance for athletes.