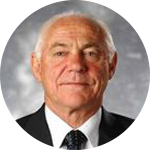 Prior to becoming the FIBA president, Bob was the FIBA Oceania President. He is currently a council member in the Association of Summer Olympic International Federations (ASOIF). He has lent his considerable experience to the organisers of the Melbourne 2006 Commonwealth Games, the Doha 2006 Asian Games, the Beijing 2008 Olympic Games and the London 2012 Olympic Games.

Bob has most recently acted as a consultant to the organising committees of the Beijing 2008 Games and the London 2012 Games.