At 41 years and 30 days of age, the Frenchman has become the oldest alpine skier to medal at an Olympic Winter Games, by winning silver in the men’s downhill at Beijing 2022.
“Doing an Olympic medal when you are 20 or 41 it doesn’t matter, it’s an Olympic medal and this is the best feeling. The record of the oldest (skier to medal at the Olympics) is not that I don’t care, but is not the most important point,” Clarey told Eurosport after the race on Monday (7 February).

The Haute-Savoie-born speedster surpassed the previous mark of USA’s Bode Miller, who claimed bronze in the Sochi 2014 Super G at 36 years and 127 days.
Four-time Olympian Clarey also holds the World Cup speed record by reaching 161.9 km/h (100.6 mph) in the classic Wengen downhill in 2013.

Clarey, who was silver medallist in Super G at the 2019 Worlds but has never won a World Cup event, wasn’t considered a favourite ahead of the race.
During his career he clinched a total of 9 podiums, including a second place in the traditional Kitzbuehel downhill just weeks before the Beijing 2022 Olympics.
“I think a lot about the ones in Tignes, where I live… My wife, my family. I couldn’t be there at this age without them,” an emotional Clarey told France TV. 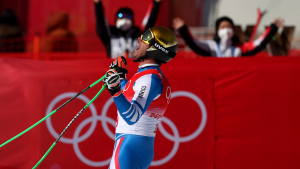 Starting with the bib 19, the Frenchman recorded the fastest second intermediate time and finished just 0.10 seconds behind winner Beat Feuz.
“I was pushing, pushing, taking a lot of risk. I knew I only had one chance left in my career to get a medal in the Olympics.” – Johan Clarey

“I knew I was doing a great race, I gave it all – the 41-year-old continued – I was getting tired of the week but one minute before the start, this is the only moment I felt good. I felt I was doing a great run, even if in downhill, we never know. It’s fantastic.
“When we push hard, when we play with the limits, there is always some mistakes. The first bibs have done some as well. But at the end of the day, I’m very satisfied with the way I did.”
Clarey admitted that this was his last Winter Olympics, but that he may compete for one more season with the 2023 World Championships taking place in Courchevel-Meribel.