Man Kaur had been struggling with her health for the past few months. She died of a heart attack on Saturday, her son Gurdev Singh said.

Centenarian sprinter Man Kaur, referred to as ‘Miracle from Chandigarh’, died of a heart attack on Saturday. She was 105 and was diagnosed with cancer some months back. Her 85-year-old Gurdev Singh said: “She suffered a heart attack at around 1pm. She was doing fine but we do not know what suddenly happened.”

The multiple World Masters Games medallist from Patiala, was diagnosed with cancer in February this year. She was admitted to Ayurvedic hospital in Derabassi in Mohali 15 days back. Kaur lived in an accommodation at Punjabi University Patiala for the past many years. 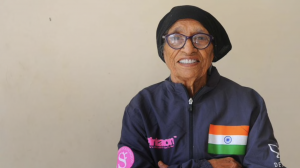 Gurdev said his mother was diagnosed with cancer at a Patiala hospital following complaints of pain in her liver and gallbladder. Later, the diagnosis was confirmed by PGI Chandigarh. “We did not get her treated at PGI as she was too old to survive chemotherapy. We took her to an Indore-based private hospital last month where her infection came down and she was quite normal after two days of treatment. But, she faced health problems again on her return home. Then, we got her admitted to a private hospital in Derabassi where she breathed her last at 1 pm,” he added. She is survived by two sons and a daughter.

Born on March 1, 1916, Kaur didn’t get into athletics until she was 93, when her son Gurdev Singh started taking her to the Punjab University grounds and noticed she could run well. He encouraged his mother to participate when he saw other women from around the world competing. Kaur won her first medal at the Chandigarh Master’s in 2010 where she was noticed by David Premnath, general secretary of the Masters Athletic Federation of India.

She won the 100 metre sprint at the World Masters Games in Auckland in 2017 and held several world records. In 2019, She also won gold in track and field events at the World Masters Athletic Championship in Torun, Poland. Kaur bagged the gold in 60m dash race, 200m sprint, shot put and javelin throw.

She was planning to participate at the Kansai World Masters Games 2021, held in May next year. We are deeply saddened she will not be with us next year and share our heartfelt condolences with her dear family and friends.

Want to play the longest hole for Golf in the world? You can at 2023 APMG in Jeonbuk, South Korea!

IMGA visit to Tampere for 2023 EMG: “Venues within 15 minutes reach from each other by car”