Mastering the ageing process in athletics

Top British age-group athletes explain how they are able to maintain good performances and avoid injuries as they get older.

As we age our cardiovascular system may witness the stiffening of the blood vessels and arteries, which means the heart has to work harder to pump blood through them. Our bones have a tendency to shrink in size and density and they may be weaker and more susceptible to fracture. We may lose muscle strength, endurance and flexibility in our once dynamic muscles and our metabolic rate may slow down, meaning it’s harder to burn those calories.

Those who continue as masters athletes are not immune from the ageing process, but those who remain successful and able to compete to a high standard must know a fair bit about how to adapt to this process.

Given this, a group of elite British masters athletes who all either run, jump or throw, joined Athletics Weekly’s Matt Long for a socially distanced round table discussion on mastering the ageing process.

The notion of age

Donald Brown starts the discussion by pointing out that he entered the sport as a masters competitor in 2006, making an immediate impact as a multi eventer in winning two US national masters championships. He alludes to the fact that there is a big difference between one’s chronological age and one’s biological age. “I’m 57 but I feel 38 years young,” he says only half-jokingly.

Paula Williams, 48, whose most cherished moment in athletics came when she gained the W45 British record (38.65m) in javelin while taking World Masters bronze in Malaga in 2018, agrees by saying she feels “only 30 something”.

What’s sometimes overlooked is the training age of an athlete. This is significant because three of our athletes in the focus group all competed as seriously as seniors and have returned to masters athletics after a significant number of years in the sport. The aforementioned Brown was a senior athlete for 15 years before taking a 10-year break to play volleyball.

As the holder of six global masters golds, endurance-based athlete Louise Rudd started track and field as a seven-year-old but she had a nine-year gap after retiring as a senior before her rebirth as a masters athlete.

Jo Willoughby represented GB as a senior back in 1989 and points out that as a 56-year-old she only returned to the sport six years ago. Williams also never competed seriously as a junior so has in effect a lower training age than the rest of the quartet.

The above is significant because all four athletes may be able to go on competing for a number of years given that a break from the sport, while maintaining health and other non-track and field related fitness, may mean their bodies don’t have the wear and tear of other masters athletes. 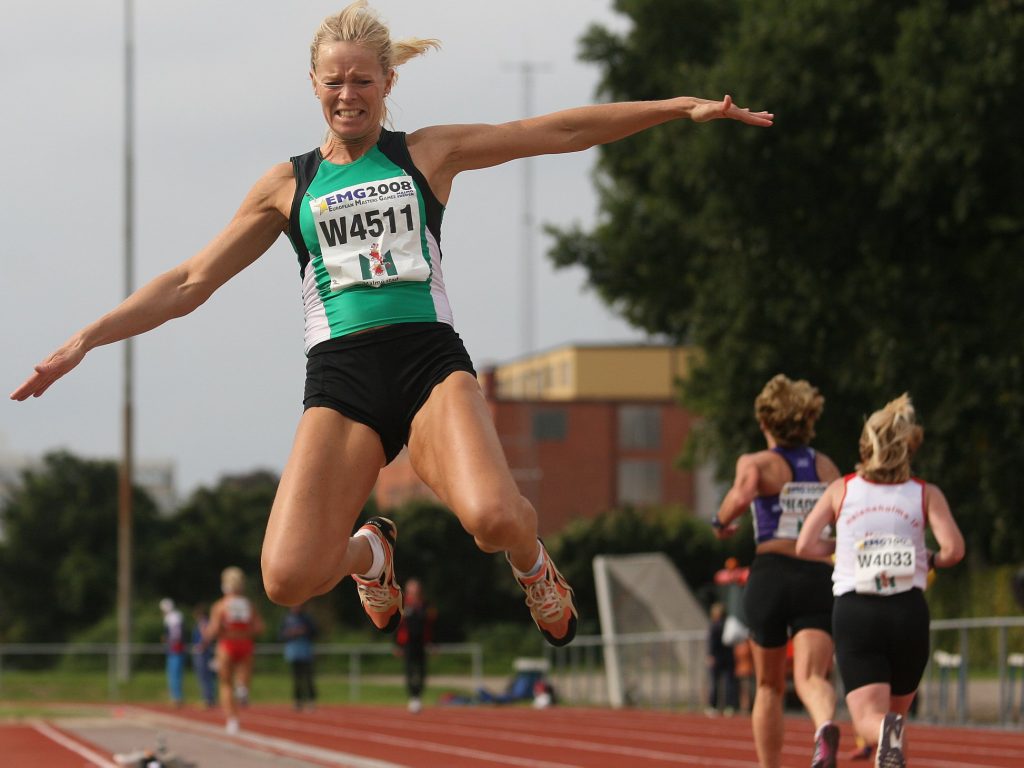 Even though Willoughby competed for GB as a senior athlete she appears to have been a late specialiser in terms of track and field. As well as her youthful engagement in track and the field the 2019 European outdoor long and triple jump W55 champion, reminds the group that, “I used to play a lot of netball, some hockey, cycling and lots of athletics”.

She has a commonality with Williams who says that, “I’ve played netball since I was nine. I was always active with netball, school track and field, rounders and tennis”.

Five-time European champion Rudd has always been active in terms of sports of some kind. Post university and looking to get back in shape, for instance she kick-boxed (attaining junior black belt status) in her early 20s.

In his younger days, Brown, who bagged a world indoor masters championships gold over 60m hurdles in 2019, enthuses that, “I played basketball, badminton, squash, handball, football, American football and volleyball”.

The above is significant in that it explains their robustness and how early work on the ABCs (Agility, Balance and Co-ordination) at the base of the pyramid of long-term athletic development can pay dividends even half a century or so later.

All four athletes acknowledge that any successful masters athlete has to adapt the frequency and intensity of training. Rudd, the 2015 world masters 800m and 1500m champion, explains: “My easy runs are ‘easier’ than they used to be as I’ve learned to ease back and I think terrain is important. I find running round grass like football pitches to help in terms of an active running recovery rather than pounding the pavements.”

With a nod of agreement, Willoughby, who holds no less than four British records shares that, “I used to train six times a week when I was younger. As a masters athlete I like to give my body chance to recover between sessions. I focus on speed work three times a week, nothing slow.

“This is combined with technical jump work and plyometrics. The intensity of my work is still fairly high. I try not to overload on triple jump training as it’s a lot of impact on the joints. I try not to over compete, again to protect my body from overuse.”

Brown, the triple 2019 European masters champion in sprints and hurdles, is keen to distinguish between frequency and intensity, stressing that: “The frequency of my training has not changed. In general I do track three days a week and weights once or twice a week. It is the content of each training session that has changed.

“In short, I do quality rather than quantity. This results in shorter sessions focused on specific areas and thereby not overly exhausting my body. Recovery at my young age is not the same as when I was even younger.” 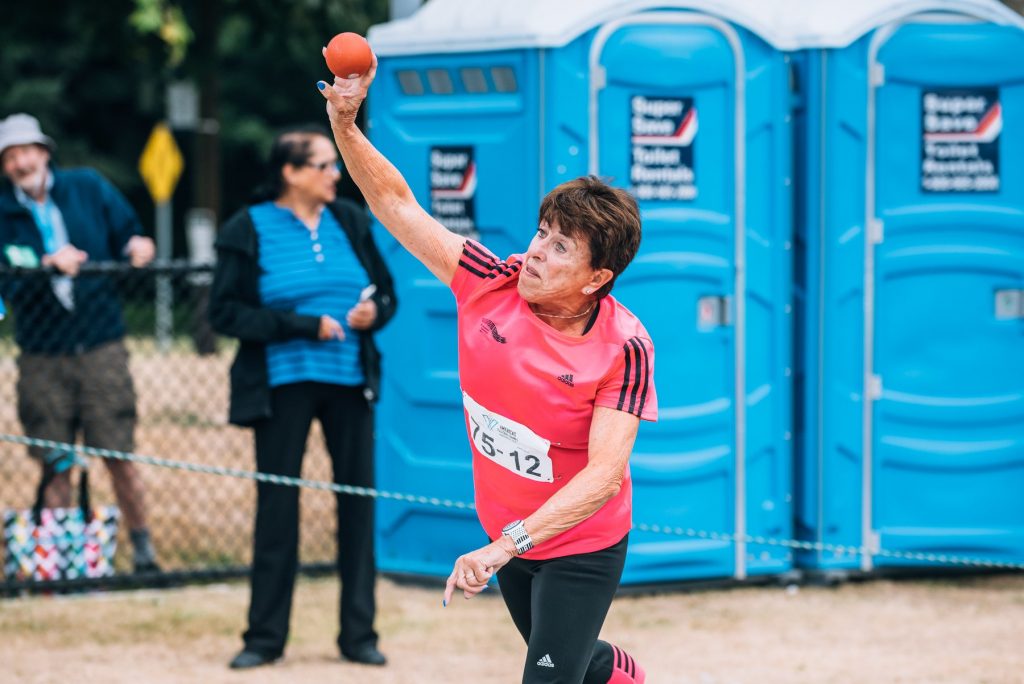 Williams, who took British W45 javelin gold earlier this year, says: “I love doing other sports as well as track and field. It’s great to mix it up. I’m currently doing tennis weekly.”

Tennis has considerable benefits for all three of our energy systems of course. Matches can last several hours which will facilitate aerobic development; baseline rallies can be intense and begin to tap in to the lactate energy system as balls are chased around the court, and anyone who leads towards the serve and volley style who rushes the net will need a well-developed alactic (stop-start) energy system.

Willoughby, who broke the W55 British indoor long jump record with 4.82m, has a different approach, preferring to “just stick to track and field now along with some walking and cycling”.

As the holder of two British masters records, Rudd is adamant that, “I force myself to take days off now”. Brown, who has been voted European masters sprints athlete of the year, agrees: “My only recovery is passive. I will rest for a day or two subject to my training and or competing schedule. I wish I had time for active recovery but unfortunately earning a living and other obligations take priority”.

Williams, who lifted the indoors inter-area team challenge trophy as captain of the Midland team last March, is keen to emphasise that at least one passive day of recovery will occur weekly and this will be strictly adhered to following a day of competition. This being said she will deviate from the rigidity of a set training schedule and take more rest if perception tells her to, wisely advising that, “I’m led by my body too”.

She works diligently in undertaking regular strength and conditioning sessions, plus mobility and flexibility through pilates. Willoughby thinks this is sound advice and adds that “I will have one or two rest days in the week and only run on three days. On non-running days I’ll do strength and conditioning. If my body feels tired or muscles have niggles I don’t train”. 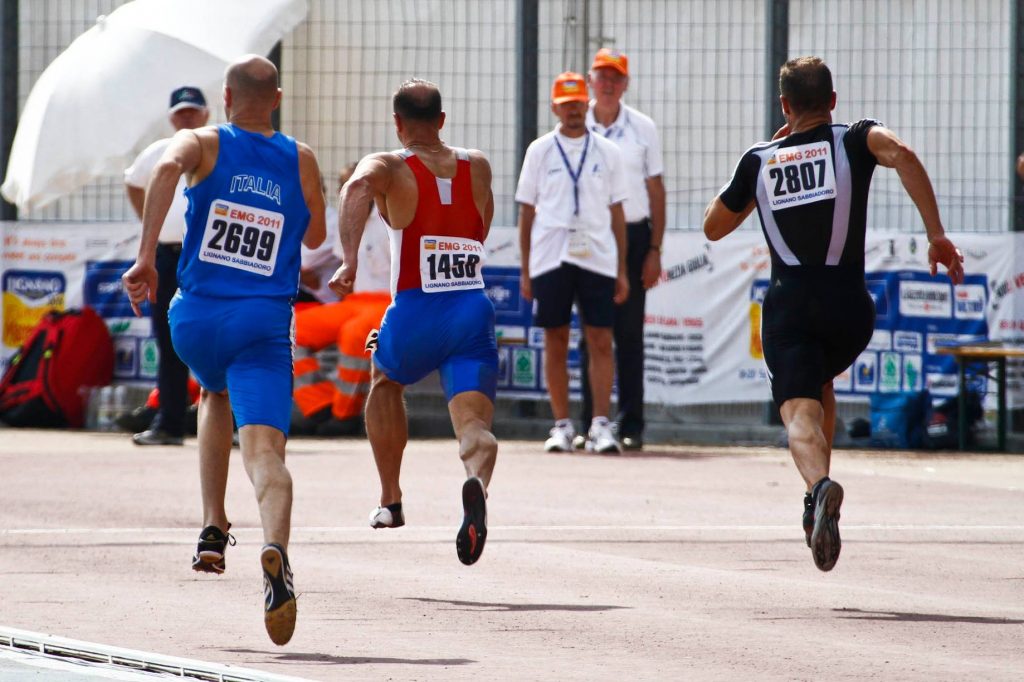 Brown, who credits coaches Joseph Caines and Leon Braithwaite, says: “I am continually managing niggles and periodic injuries. As I grow less younger, I see the changes in my body that need to be accommodated. There are certain exercises that I no longer do such as squats. They impact my knees negatively. Stretching and foam rolling have become part of my daily routine. Drinking plenty of water and managing my diet are key. Regular deep tissue massage has also been instrumental in managing my injuries.”

Rudd, who was guided by Dave Turnbull but who is now working with the duo of Eilish McColgan and Michael Rimmer, agrees that injuries are somewhat normalised as a masters athlete, acknowledging that: “I always do some kind of mobility drills, sometimes using hurdles before every run. I see my physio Chris Bramah who oversees my S&C work.”

Jo, who is supported by Ian Willoughby, confides that injuries have been an ever present well before she reached masters status. “I had lots, even when I was younger. Mainly injuries like ruptured calf muscles and Achilles tears. At last I have realised there is probably a link between the two, so I now spend a lot more time on maintenance and preventive measures.”

Williams, who is now coached by Paul Bearman after being guided by Anthony Humphreys, admits that: “I picked up an injury in 2018. It was a right plantar plate capsule high grade tear. I was really cross but knew I had to adapt my training.

“I’m very stubborn but I managed to stay away from long and triple jump – reluctantly. I then changed my footwear and got back into running.”

Are you an athlete keen to compete, meet new people and travel the world? Check out our Masters Games events.

Many make marathon effort in resort