Krista DuChene’s and Lyndsay Tessier’s inspiring performances in Doha and Berlin put to rest any doubts that marathoners of a certain age can perform well on the world stage.

Krista DuChene doesn’t believe in setting limits based on numbers. So when the Olympic marathoner turned 40 two years ago and became a masters athlete, nothing changed. She continued to log huge miles and clock some of the fastest times in the country over 42.2 kilometres.

Since turning 40, DuChene has battled wind and rain to place third overall in the 2018 Boston Marathon and ran sub-2:40 at both the Scotiabank Toronto Waterfront Marathon last fall and the Tamarack Ottawa Marathon this spring to finish among the top- three Canadian women.

Among the country’s best…

Even as a masters runner, DuChene is among the best in the country and isn’t afraid to say she’s hoping to earn a place on Team Canada for the 2020 Olympic Games in Tokyo.

DuChene says she doesn’t know if she’ll ever better her marathon personal best of 2:28, which she set when she was 36. But she believes aging–and the experience that comes with it–can give her an edge in the marathon, where mental strength plays such a huge part.

“When you’re my age and you’ve been running this many marathons, you’ve likely had other life experiences that you can draw upon to make you a strong runner,” says DuChene, who’s finished 18 marathons in 17 years.

“Having done it for so long, you know what to expect. It never becomes easy to run a marathon, but I think it’s just a matter of drawing on those past experiences.” 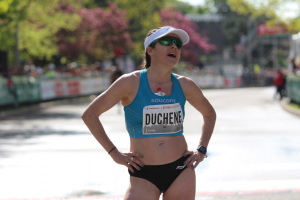 DuChene’s coach, Dave Scott-Thomas, says it’s “extremely uncommon” for athletes in their 40s to be selected for national teams. Yet he believes making the 2020 Olympic team is “absolutely” a possibility.

“It’s realistic that there is some decline in performance as you get older, Scott-Thomas says. “At no point do we just sort of say, ‘well, you can’t run fast anymore because you’re 40.’”

Scott-Thomas says years of running marathons and accumulating life life experience is a huge advantage for his masters athletes. By now, DuChene is “essentially unflappable” and able to adapt when races or training runs don’t go as planned.

“That allows you to save so much emotional energy by having that perspective on life,” Scott-Thomas says. “That’s not just their experience with running, it is being parents, it is having jobs, it is just going through the vicissitudes of being an adult and having things happen to you.”

National-level athletes are healthy and hungry to keep competing

A 2017 study that analyzed the times of top age-group finishers at the Boston, Chicago and New York Marathons from 2001 to 2016 found that, on average, elite marathon times began to decline after competitors reached age 35.

James Smoliga, a physiology professor at High Point University in North Carolina and one of the co-authors of the study, said the decline is due to both physiological and cultural factors and, as in all things, there is bound to be individual variation.

Although the number of muscle fibres people have decreases with age, that typically doesn’t start happening until after people turn 50. Smoliga said there are a number of reasons why there may be declines in performance before then, including that people in their late 30s and early 40s are satisfied with the success they’ve already achieved, feel burned out, are struggling with injuries or have other life commitments that prevent them from training as much as they did when they were younger.

If national-level athletes are healthy, hungry to keep competing and have family or sponsorship structures that allow them to keep training full time into their 40s, Smoliga said they will likely fare better than average age-group winners he and his colleagues looked at in their study.

That’s exactly DuChene’s situation. “The drive to compete and to run is definitely still within me and that hasn’t changed much or at all,” she says. 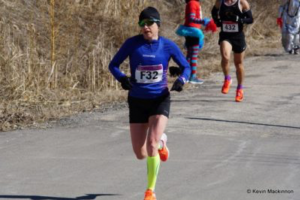 Today the marathoner works about one day a week as a registered dietician and is supported by her husband and three children as she continues to chase her running dreams. Much of her training is done on her own during the day while her kids are at school, but she also makes occasional trips from her home in Brantford, Ont. to train with coach Scott-Thomas and the Speed River Track and Field Club in Guelph.

DuChene believes she’s been able to perform so well at a later age because she hasn’t spent her whole life running hard. She played hockey in college and started running afterward to stay fit. She also took three complete physical and mental breaks from high-level training when she gave birth to her three children.

“You definitely have to have balance. When you’re putting everything into one sport or one career and that’s your entire focus, that can be dangerous,” DuChene said. “Having a family and a career aside from my running career is what has allowed me to be successful in my running.” 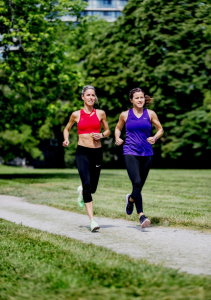 DuChene is not the only Canadian marathoner who could find herself on a national team in her 40s. North York athlete Lyndsay Tessier, who ran a 2:30 personal best at the 2018 Berlin Marathon at the age of 40, was named to the Canadian World Championships team for the marathon this year.

“Seeing three marathoners in Canada in their 40s doing well at that stage of the game is great. I’m not sure it’s a precursor for anything, but hopefully, it is,” Scott-Thomas says.

“I would like to think that part of the messaging there is not just about the Olympics, it’s actually about being a healthy person later in life. 40 ain’t that old any more.”

Smoliga says seeing runners like DuChene and Tessier, who are performing at very high levels in their 40s, may become increasingly common. That’s because the science and wisdom around training and recovery has improved over time and each generation of masters runners will have more years of smart training behind them than previous generations of athletes.

Tessier, a 41-year-old elementary school teacher, had enjoyed running as a child but stopped after Grade 8 when teachers and coaches started expecting her to place well in cross-country and track races. “It took the joy from it,” Tessier says. “Not that I couldn’t deal with the pressure, but it removed the pleasure and so I stopped.”

Tessier didn’t run again for more than 20 years. She hadn’t realized she missed the sport until a friend challenged her to take part in a Running Room clinic to train for a half marathon when she was 33. As soon as Tessier started running, she loved it and was soon running several days a week.

She finished her first half-marathon in a time of 1:34 and almost immediately began training for a marathon. She made her debut running a 3:09 at the GoodLife Toronto Marathon in 2012.

Tessier has since run five more marathons, setting substantial personal bests in all but one. Her 2:30 run at the 2018 Berlin Marathon–a new Canadian masters record–was more than six minutes faster than her previous personal best of 2:36, which she ran at the 2017 Scotiabank Toronto Waterfront Marathon. 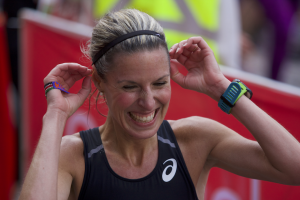 “I was so ignorant getting into the sport,” she says. “I’m learning, I am, but I had a lot to learn.” Between 2012 and 2016, Tessier suffered four stress fractures: one on her pelvis and three in her femurs.

She says she’s been able to stay injury-free since then by not overtraining and by paying attention to her sleep and diet. Tessier, who usually gets her runs in early before heading to school to teach, now trains for one marathon a year instead of two, sleeps eight hours a night instead of six and eats meat after years of being a vegetarian.

She says she doesn’t go into a race with a time goal in mind and has been surprised every time she crossed the finish line to see how fast she ran.

Dealing with pressure at the highest level

Being named to the 2019 Canadian World Championships team for the marathon this year was “surreal,” and she’s having to learn to deal with the pressure that comes with it. “I need to shelve that idea and run the way I run and leave the pressure out of it even though it’s there,” Tessier says.

Speaking to Canadian Running this summer, she said she can only focus on one thing at a time and isn’t thinking about the 2020 Olympics at this point. Tessier knows it’s unusual for athletes to be laying down personal bests and making their first national teams at age 40–but she’s proven both are possible and she isn’t ruling out running even faster. “I’ve not considered age to be a limiting factor,” she says.

“I’m not naive, I know that it will be eventually, but I think our limits are as much or as little as we make them out to be.”

Inspired? Check out our Events section to see how you can participate in the next Masters Games event.