Representatives from politics, sport, business and the organising committee as well as members of the volunteer team tirol celebrated with a kick-off event in the city’s exhibition centre. Preparations for the Winter World Masters Games 2020 have now been underway for more than a year.

The official launch gave partners, sponsors and volunteers as well as local athletes taking part in the Games the chance to get to know each other. Among those present were deputy regional governor, Josef Geisler, and mayor of Innsbruck, Georg Willi. They were joined by Jens v. Holm (CEO International Masters Games Association, IMAG) and Georg Spazier (head of the WWMG 2020 organising committee) as the clock counts down to January 2020.

In line with the event’s motto “spirit together” the event included a chat with legendary local ski jumper Toni Innauer as well as a ceremony to honour the hard work and dedication of local volunteers and the presentation of the official WWMG 2020 uniform. 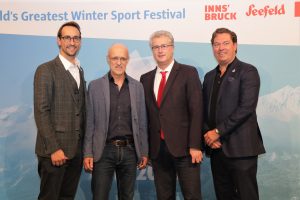 More participants than the Winter Olympics!

The arrival of winter in Austria gave an extra boost to the already impressive number of registrations.

The registration phase closed for most sports on 1st of December. In January 2020, Innsbruck and Tyrol are set to welcome at least 3,030 athletes from 56 nations for the Winter World Masters Games 2020.

They will be accompanied by more than 300 companions who have also signed up to be part of the Games. Sports such as Biathlon, Figure Skating, Speed Skating and Alpine Skiing are completely sold out.

This huge interest in the WWMG 2020 has resulted in a new record: “Based on the number of participants, the WWMG 2020 are going to be bigger than the Winter Olympics in Pyeongchang, where 2,833 athletes took part.

That makes the WWMG 2020 the biggest winter sports festival in the world,” explains Georg Spazier. 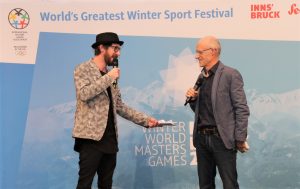 The competitions are being organised in close cooperation with local sports clubs, each a specialist in its own field.

For example, the Alpine Skiing events are being run by the SC Patscherkofel Innsbruck, while the local clubs SV Sistrans and SV Sellrain are responsible for the Ski Mountaineering races. The Ski Club Seefeld, Kitzbühel Ski Club and Orienteering Innsbruck are in charge of implementing the Nordic events. The Austrian Speed Skating Association will take responsibility for the Speed Skating competitions, the ice hockey tournaments are being held in close cooperation with the local Tyrolean Ice Hockey Association, and Curling will be organised by the Kitzbühel Curling Club. All events at the WWMG 2020 will use existing venues and infrastructure.

“Tyrol is the perfect host for the Winter World Masters Games. We have everything to make these Games a fantastic event, from state-of-the-art venues to local clubs and associations which are specialists in their respective sports and disciplines,” comments Josef Geisler, deputy regional governor of Tyrol.

Volunteer team essential to smooth running of the WWMG 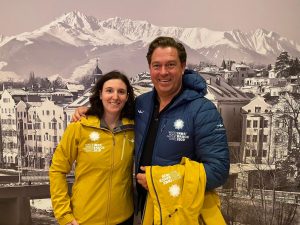 Another essential player in ensuring a smooth running of the WWMG 2020 are the volunteers. With their hard work, local expertise and friendly smiles they will be a key element in creating memorable Games with a special atmosphere.

“Without the volunteers it would be simply impossible to hold the WWMG 2020. They are the embodiment of the event’s motto, Spirit Together. With their dedication and commitment, they show us what teamwork really means – pulling together to realise a common goal,” says Georg Willi, mayor of Innsbruck.

In recognition of their hard work, a ceremony was held at the WWMG 2020 launch to honour the most long-standing members of the volunteer team tirol.

In January 2020 around 700 volunteers will be on hand to support the WWMG and themselves get a unique look behind the scenes at one of the world’s biggest sporting events. Joining the volunteers and guests at the event in Innsbruck’s exhibition centre was Toni Innauer.

The former Olympic ski jumping champion encouraged people of all ages to get involved in volunteering and underlined the sense of achievement that is possible by taking on new tasks and overcoming new challenges.

He was also keen to emphasise the importance of not only physical exercise but also mental flexibility for a happy and fulfilling life at any age.

Since the creation of the Winter World Masters Games in 2010, two editions have been held.

The first event in Bled (Slovenia) was followed by a second, larger one in Quebec (Canada). The third edition is now set to take place from 10 to 19 January 2020 in Innsbruck.

“Innsbruck 2020 will take masters sports into a new dimension. The regional capital of Tyrol has a long sporting history which the Masters Games are proud to become a part of. I would like to take this opportunity to thank the organising committee for their hard work and professional preparation,” comments Jens v. Holm, CEO of the International Masters Games Association.

Over the years, Tyrol and Innsbruck have hosted numerous major international tournaments and events.

“Spirit Together!” at the Winter World Masters Games, Innsbruck 2020