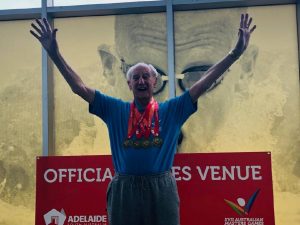 “I also entered the 50-m breaststroke but was disqualified for not touching the wall at the end of the race,” Keith said.

“It was my fault. I’m old enough to know what I should have done.”

Keith only started training for the Australian Masters Game in March.

“Competing in the Masters was all a big surprise for me,” he said.

What motivated Keith to start training?

“I turned 90 last April. My wife, Marcia passed away last year and I was feeling pretty down so I said to the kids that I had to find a project.

“That’s when I heard about the Masters Games. I’ve always played plenty of sport. I’ve been a swimmer from way back. I joined Wanda Surf Club in 1949 and won the surf championship that year. The next year I won the belt race championship.

“After that I got married and raised a family of three children so I hadn’t done any competition swimming for 65 years.”

Keith and Marcia married in 1950 and had three children, Karen, Graham and Bruce. He now has seven grandchildren and two great-grandchildren.

“When I decided to go to the Australian Masters Games and the kids approved I thought I’d better get back in the pool and do some training,” Keith said.

He trained twice a week at Sutherland Leisure Centre urged on by his daughter, Karen.

“I found it easy to get back into training. Of course, I couldn’t do the time I’d done in the past,” he said.

Keith had a big support team when he headed to Adelaide for the Games.

There was Keith’s son, Graham and his wife Tracey; his daughter Karen and granddaughter Kristi, and two of his nieces, Judy and great-niece Jade who travelled from Nelsons Bay as a surprise.

“I didn’t know they were coming,” Keith said. “It was a big surprise for me. We went for breakfast and there they were walking along the Promenade.”

Keith said it was inspiring to compete in the Masters Games. 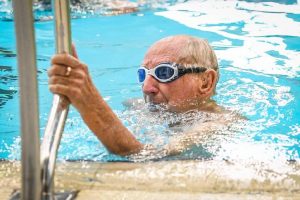 “I would say to anyone, no matter your age, if you feel like some inspiration, compete in the games. It was a beautiful experience,” Keith said.

“I asked one of the volunteers when the next games were being held and I believe it is in two years time.

But Keith could be back in the pool training sooner as Karen is looking around for other events for him to enter.

“She suggested we compete in a family relay – Karen, Graham and the grandkids,” he said.

“It would be a real family event. Family is all there is.”

To learn about attending an international Masters Games, visit our Events section to see what’s coming up.

Article first appeared in The Leader AU on October 17 2019